From the Cobblestone Connections newsletter, Vol 16. No. 4:

Fall 2017 was a BUSY time here at Cobblestone Springs!! We held our annual fall dinner fundraiser on Sunday, October 1. It was a beautiful fall day to welcome our diners.

Then on Sunday, October 22, we celebrated our 20th anniversary with an open house, tours, refreshments, and the 20th anniversary edition of “Built with Living Stones,” a PowerPoint presentation on the mission, history, programming, and renovation of Cobblestone Springs. See more photos below this post.

Almost a hundred people attended the open house. It was wonderful to welcome so many former board members, volunteers, neighbors, and friends into the place they have helped to create. Those who came (and many others who weren’t able to attend that day) are the “living stones” that have made Cobblestone Springs a reality.

Thanks to all who worked, and those who visited, for making our anniversary such a success!

The North Wing is our popular accommodation on the ground floor.

The courtyard or patio between the north and south wings, October 2017 open house.

Tempting treats displayed for guests at the Open House in fall 2017.

Guests at the Open House check out the front fountain, fall 2017. 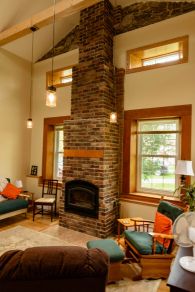 Linda Decker and Jan Carr chat in the library during the fall Open House, 2017. 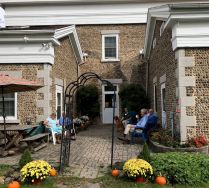 Anne Alderman giving a tour of Cobblestone Springs during the 2017 fall Open House.